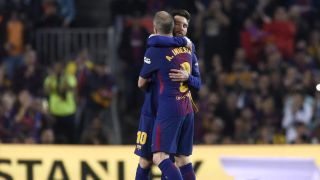 In any profession, dropping something while still excelling is a bold move but one that invariably enriches a legacy, something Andres Iniesta will undoubtedly feel after playing in El Clasico for the final time.

Having already wrapped up the league title and the Copa del Rey, in some senses the second LaLiga Clasico of the season had an air of irrelevance about it.

But it gave the world one last chance to see the great Iniesta in the biggest rivalry in club football, as he prepares to depart for China 14 years after first appearing in the fixture as a substitute for Henrik Larsson.

Having recovered from the knock that made him a doubt for the game, Iniesta trudged out of the tunnel as shyly as ever for his 38th Clasico – every camera, every eye fixed on him like only he mattered.

When under way he was typically cool on the ball, cruising forward with effortless nonchalance and feeding Jordi Alba with two outside-of-the-boot passes in just the third minute.

And his lovely turn to lure Gareth Bale into a clumsy challenge nine minutes before the break proved that, just five days prior to his 34th birthday, his mind and feet are still quick enough to fool even the swiftest.

In a chaotic first half which saw Cristiano Ronaldo cancel out Luis Suarez's early opener, Iniesta offered an assuredness that was lacking from nearly every other player on the pitch.

Sergi Roberto's sending off for appearing to strike Marcelo just before the break would have been the death knell for many midfielders of a similar age to Iniesta, and Ernesto Valverde was forced into a reshuffle.

But the coach's next move highlighted the fact there has been no change to the Barca pecking order despite significant investment.

Philippe Coutinho, brought in as a replacement of sorts for Iniesta, was the one withdrawn at half-time – Valverde introducing Nelson Semedo to restore relative balance to his 10-man side.

Replacing a playmaker who was signed in a deal which could reach €160million (£146m) instead of the aging Iniesta proved the standing in which he is still held and influence he continues to have.

And, unsurprisingly, the 33-year-old showed precisely why he was kept on, with his composure in possession and forward drives helping ensure Barca continued to have a positive outlook despite their numerical disadvantage.

The second goal then arrived – Lionel Messi providing a moment of individual magic as he coolly sidestepped two challenges and found the bottom-left corner from 20 yards in the 52nd minute.

But regardless of his ability, there is little a player can do to stave off the physical effects of time, and fearing the potential onslaught that was likely to come Barca's way, Valverde felt Iniesta's talents were to become a luxury.

With the Catalan giants switching to a counter-attacking setup, Paulinho came on for Iniesta just before the hour – the Brazilian bringing the power and box-to-box attributes his colleague has never possessed.

An incredible ovation followed, as the player who helped define a generation for club and country said farewell to LaLiga's biggest match, his substitution around the hour mark a common sight this season.

The tears of Iniesta's farewell news conference on April 27 were nowhere to be seen, even after Gareth Bale's stunning equaliser. No, as he sat there on the bench after his exit, there was a sense he had been able to prove his point about departing.

"I understand that in the near future I will not be able to give the best of myself in all senses, both physically and mentally," Iniesta said to reporters on that emotional day. "If I had imagined finishing my career here, it would have been like this, feeling useful, feeling important and still winning titles."

Having secured a domestic double and helped Barca to the brink of an unbeaten LaLiga campaign, a Clasico disappointment in the shape of a 2-2 draw at home will not register as a blemish in Iniesta's remarkable career.

His desire was to leave Barca on his terms - he departs useful, important and wanted.