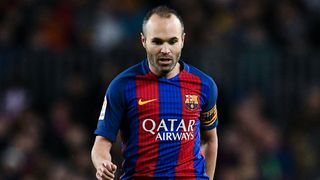 Barcelona captain Andres Iniesta still dreams of retiring at the LaLiga giants, but admits he may have to move.

Iniesta, 33, is out of contract in mid-2018 and his future is undecided, having made just 13 LaLiga starts this season.

But the midfield maestro said his wish was still to retire at Barca, a club he joined as a 12-year-old.

"I've said it a few times in the last month. I wouldn't say I'm tired of repeating it but I like thinking that at this stage of my career, I'll decide on my future," Iniesta said.

"I like being honest to myself and also with my club. For the time being I have the strength, the motivation and the conviction to keep performing at my best throughout the next few years. I have no doubts about that.

"But at the same time I feel that there are circumstances that make me consider some things. That's completely normal bearing in mind the situation.

"It could be depending on how the season goes, on what the club offers, on how I see it and also how they see it, I will look at my situation within the team then I will decide. I do not know what we will decide in the next few months.

"I still have a contract here and I'm still certain that next season could be a great one for us. Hopefully there won't be any setbacks.

"My wish has been always the same and that doesn't change, which is retiring at Barcelona. That's always been my wish since I got here aged 12. But of course there are always possibilities for something else."

Ernesto Valverde will lead Barca next season as they look to reclaim the LaLiga title from rivals Real Madrid.

Iniesta is confident the former Athletic Bilbao boss, appointed on Monday, can lead his team to success.

"As with any new project, we have to aim for the best. The coach is more than capable of managing Barcelona, otherwise he wouldn't have been picked," he said.

"Therefore we will come back next season with huge excitement and also with the intention of making that step forward we didn't make this season.

"The demands of Barcelona are always like that so that won't change so I'm convinced it can be a great season if we do things right."