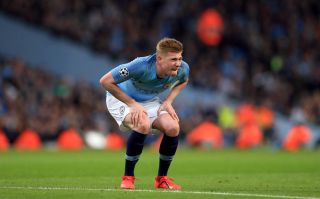 The Belgium international’s injury-hit campaign took another turn for the worse as he sustained a hamstring problem in Saturday’s defeat of Tottenham at the Etihad Stadium.

The 27-year-old could feature again this season but Guardiola admits he is unsure when he will be fit again.

Asked on Tuesday when he might return, Guardiola said: “I don’t know, we will see. It is a muscular problem and we will see in the next days but tomorrow he is not available.”

The clash at Old Trafford could have a crucial bearing on the Premier League title race. City trail leaders Liverpool by two points but the fixture is City’s game in hand.

Guardiola said: “We have four games left and we have to win all four to retain the title. It is not an easy place to go but, at the same time, it is a nice place to go. We know exactly what we have to do.”