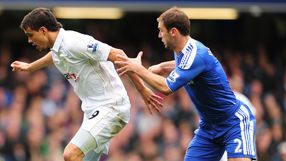 Television replays showed the Serbian international lashing out at Wigan's Shaun Maloney in an off the ball incident unseen by the match officials during Chelsea's 2-1 victory in the Premier League at Stamford Bridge on Saturday.

Ivanovic faces a suspension if he is found guilty by the FA.

Chelsea have a hectic schedule of fixtures coming up in the Premier League, Champions League and FA Cup and losing Ivanovic would represent a major blow.

The Serb has excelled at right-back this season and if he is banned the Londoners would have to bring in Jose Bosingwa or Paulo Ferreira as a replacement.

Chelsea play Tottenham Hotspur in an FA Cup semi-final at Wembley on Sunday before meeting holders Barcelona in the first leg of a Champions League semi-final at Stamford Bridge three days later.

Ivanovic has until Wednesday to respond to the charge.