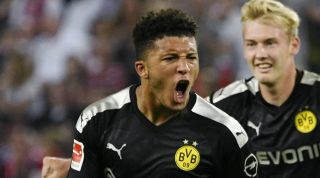 Manchester United are planning to launch a move for Jadon Sancho next summer, report the Evening Standard.

Ole Gunnar Solskjaer was keen to sign Sancho before the start of this season, but Borussia Dortmund refused to consider a sale.

The winger recently signed a new contract at Signal Iduna Park, increasing his salary to £190,000 per week.

However, United have not given up on their pursuit of the England international, and Solskjaer is prepared to wait until next summer before submitting a bid.

The club look short of options up front having opted against replacing Romelu Lukaku and Alexis Sanchez, but United will be patient as they attempt to acquire their leading target.

Sancho will not be short of suitors, though, and the Red Devils may need to qualify for the Champions League to have a chance of signing one of Europe's hottest prospects.

Revealed! The best- and worst-case European group draws for every British club this week