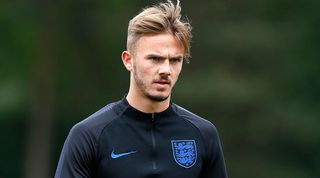 Fresh from another disappointing semi-final exit against Holland in the UEFA Nations League, England continue their Euro 2020 qualification campaign with a pair of games against Bulgaria and Kosovo.

Gareth Southgate will name his squad for the fixtures at 2pm on Thursday, as he attempts to defend his 100% record in qualifying so far.

Football moves quickly, however, and a number of young players have made strong cases to be included since he named his last squad. Here’s five of them...

Despite a terrific debut campaign in the Premier League for Leicester, Maddison is yet to win a Three Lions cap. The 22-year-old created more chances than anyone else in the top flight last season, ending with seven assists and the Foxes’ Young Player of the Season award.

He’s continued his fine form in the current campaign under Brendan Rodgers too, having already earned a man-of-the-match award against Chelsea and grabbed two assists from three games.

For Maddison to be accommodated in the starting lineup, one of either Dele Alli or Jesse Lingard would have to drop out from England’s most recent starting XI. Both scenarios seem fairly likely: Alli has only just returned to training following a hamstring injury, while Lingard is still without a goal or an assist in the current calendar year.

Maddison was called up for Nations League matches against Spain and Croatia, but he didn’t play a part in either game. Southgate can surely ignore him no longer.

The elegant attacking midfielder is testament to the new crop of technically gifted English players to have emerged in recent years. After impressing on loan at Derby last season as the Rams fell just short in the Championship play-off final, Mount returned to Stamford Bridge in the summer. The 20-year-old was soon joined by his former manager Frank Lampard, after the club legend was appointed as Blues boss in July.

The pair had a strong working relationship during their time at Pride Park, and that has carried over into 2019/20. Lampard has entrusted Mount with starts in each of Chelsea’s Premier League fixtures so far this season, and his faith rewarded with goals against Leicester and Norwich.

Continued performances like this should be enough for the youngster to force his way into England contention. Like Maddison, he was called up for those Spain and Croatia games but didn’t make it onto the pitch.

A wildcard option, but another 20-year-old who must be in Southgate’s thoughts. Willock’s place as a starter at Arsenal came as a surprise; he’s already improved his tally of  Premier League games from last season.

He’s impressed, too. Unai Emery singled him out for praise after Arsenal’s defeat to Liverpool on Sunday, which came after the youngster had earned his manager’s adulation for a gutsy recovery tackle on Jonjo Shelvey against Newcastle.

Willock would fit well into Southgate’s favoured three-man midfield, as he possesses the energy and positional awareness required to cover England’s marauding full-backs. It may be too soon for him to start against Bulgaria, but the young Gunner clearly has a future in the national team.

England are blessed with a selection of excellent right-backs. Trent Alexander-Arnold, Kyle Walker and Kieren Trippier are all first-choice full-backs at some of the best clubs in Europe, and more (see Max Aarons, Reece James) lie in wait. Wan-Bissaka, however, looks best placed to challenge Alexander-Arnold for a starting spot right now.

The Spider, as he is affectionately known thanks to his arachnid-like legs, completed a move away from boyhood club Crystal Palace in the summer following a brilliant breakout season in which he made 35 appearances. The 21-year-old hasn’t missed a minute in the Premier League for Manchester United since.

Champions League winner Alexander-Arnold is most likely to start against Bulgaria, but Southgate is likely to rotate for Kosovo and Wan-Bissaka – who represented DR Congo’s U20s against England in 2015 – has a fine chance of taking his next step.

Maybe? England are hardly spoilt for choice when it comes to options beyond Harry Kane. Callum Wilson is an excellent Premier League striker who deserves his place in the squad, but Burnley’s Barnes is another strong option.