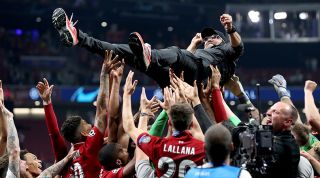 The Premier League dominated Europe last season, with four of its clubs making up the finals of the Europa League and Champions League.

Now, six of them – seven if Wolves can progress against Torino on Thursday – will have their group stage fates revealed later this week.

They may be joined by the Old Firm sides, provided that both Celtic and Rangers can bypass Sweden’s AIK and Polish outfit Legia Warsaw respectively in Europa League qualifying. If they do, they’ll be included in the same draw as Manchester United, Arsenal and (fingers crossed) Nuno's Wolves.

It's worth noting that some of the below is subject to change with play-off second legs still to come in some cases.

The only Premier League side not in Pot 1 for Thursday’s draw are Spurs, who will again occupy a spot in Pot 2. But this doesn’t guarantee an easy ride for England’s top teams.

The standout team in Pot 3 is Inter Milan, with another potential Chelsea return on the cards for both Antonio Conte and Romelu Lukaku. Bayer Leverkusen would also offer a stern test thanks to their form under Peter Bosz – the German side have averaged 2.57 goals per game in the Bundesliga since the Dutchman's arrival in December. Easier draws include Champions League whipping boys Olympiacos – who haven’t reached the knockout stages since 2013/2014 – and Club Brugge.

Pot 4 could present more challenges than expected. Julian Nagelsmann’s RB Leipzig and Fatih Terim’s Galatasaray are dangerous prospects, while Atalanta scored more goals than anyone else in Serie A last season. Red Star Belgrade flexed their Champions League muscles last campaign by recording a memorable win when Liverpool came to visit, and the Rajko Mitic Stadium remains one of the most intimidating away trips in world football – even more so after fans have parked a tank used in ex-Yugoslavia outside of it.

Arsenal and Manchester United will be placed in Pot 1 of the draw and, barring disaster, should secure easy passage to the next round. Celtic will go into Pot 2 if they win their qualifier, Wolves into 3, and Rangers 4.

In Pot 3, Azerbaijani champions Qarabag represent another far-flung trip and have proved themselves capable of an upset, as evidenced by their two draws against Atletico Madrid in the 2017/2018 Champions League. First, though, they must beat David Healy’s Linfield – something they failed to do in a 3-2 first-leg defeat. In the same pot, nobody will want to face last season’s semi-finalists Eintracht Frankfurt.

In Pot 4, Istanbul Basaksehir still employ a litany of well-known ex-Premier League players reaching the twilight of their careers. Demba Ba, Robinho and Gael Clichy are all on the books, while Arda Turan is also spending the season on loan in Turkey’s capital. At the other end of the spectrum, one of Luxembourg’s F91 Dudelange or Armenia’s Avan Academy – who were only established in 2017 – will be joined by Ferencvaros (Hungary) or Suduva (Lithuania).

With all this considered, here are the best and worst scenarios that Arsenal, Manchester United and Wolves could face by the time that the draw is completed on Friday: