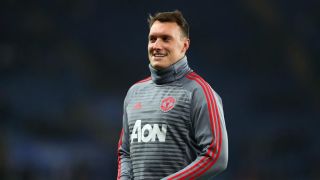 Phil Jones is taking inspiration from the unusual source of rivals Manchester City as Manchester United look to push for an unlikely Premier League triumph.

City have dominated the top flight this season and only suffered their first defeat of the campaign on Sunday, going down 4-3 to Liverpool in an enthralling encounter at Anfield.

With United securing a 3-0 win at home to Stoke City the following day, Jose Mourinho's men closed the gap to the league leaders to 12 points.

Jones does not believe the gap to be insurmountable, pointing to the City side that surged from eight points adrift of United with six games remaining to win the title on a dramatic final day under Roberto Mancini in 2011-12.

"Football is football, never say never. I remember in my first season we were eight points clear, absolutely cruising, no way we'd let the lead slip and we lost it on the final day," said Jones.

"People can say what they want, but we'll continue to be positive and push forward. You never know, it happened in 2012 to us, so why not?

"We're doing well, we need to keep going. It was a big, big game for us on Monday with points to be played for and teams dropping points around us.

"It's another big game on Saturday against Burnley."