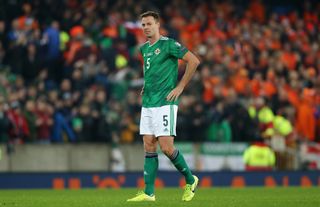 Jonny Evans has been named in a strong 26-man Northern Ireland squad for the Euro 2020 qualifying play-off game against Bosnia and Herzegovina and UEFA Nations League matches against Austria and Norway.

Evans was in Ian Baraclough’s squad last month but did not travel to Bucharest for the draw with Romania for personal reasons before withdrawing from the group ahead of the 5-1 home loss to Norway through injury.

There was fresh concern when Evans hobbled off during Leicester’s 5-2 win over Manchester City at the weekend with a calf problem, but the 32-year-old is included in the group along with Sunderland defender Tom Flanagan who missed last month’s games for personal reasons.

There is one new face in the form of St Johnstone’s 20-year-old midfielder Ali McCann, but Aberdeen’s Matty Kennedy is out with an injury while there is no place for Linfield’s Shayne Lavery.

Northern Ireland will travel to Sarajevo for their crucial showdown with Bosnia and Herzegovina on October 8 – almost seven months after the game was postponed from its original date amid the coronavirus pandemic.

If Northern Ireland can win in Sarajevo, they will face either Slovakia or the Republic of Ireland next month for a place at the rearranged Euro 2020 finals.

Following the Bosnia trip, Baraclough’s side will play Austria in Belfast on October 11 and then travel to Oslo to face Norway on October 14.