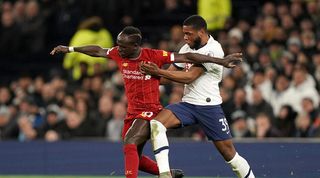 Jose Mourinho has praised Japhet Tanganga after the 20-year-old's impressive display against Liverpool on Saturday.

The youngster performed well for most of Saturday's clash and made an excellent clearance to deny Roberto Firmino early on.

And Mourinho dismissed talk of the January transfer window in his post-match press conference, instead choosing to hail the young defender's display.

"The last thing I want to do after this performance is to speak about [buying new] players,” he told reporters.

“I think it is a way to show respect to these guys, not to speak about new players.

“Can we say Tanganga is a new player? He had never played a match for Tottenham in the Premier League. Today he played and today he proved that he can play for us.

“I think when they saw the list [of players], they thought, ‘Oh, what position does this guy play?’

“I think now they know. The kid was really good. So instead of speaking about, crying about Harry Kane and Sissoko and Lloris and Ben Davies, let’s smile with Tanganga.”

The Tottenham academy product revealed that Mourinho asked him if he wanted to play against Liverpool four days before the game.

Tanganga will hope to keep his place in the starting XI against Watford next Saturday, when Spurs will look to close the nine-point gap separating them from Chelsea in fourth place.

The 20-year-old could also feature in Tuesday's FA Cup third-round replay against Middlesbrough on Tuesday.