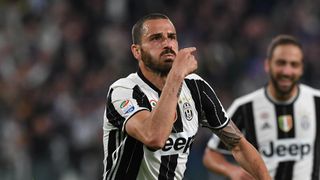 Leonardo Bonucci has urged Juventus to rediscover the "ruthless" streak needed to clinch a first treble in the club's history.

After a 1-1 draw with local rivals Torino on May 6 forced Juve to wait for a record sixth successive Serie A title, Massimiliano Allegri's side were unable to get the job done last Sunday as they fell to a 3-1 defeat against Roma.

Their next chance to claim the title comes at home to relegation-threatened Crotone on Sunday, but before that they take on Lazio in the Coppa Italia final on Wednesday.

Juve are also chasing glory in the Champions League, facing Real Madrid in the final on June 3, and Bonucci has called on his team-mates to do all they can to ensure they bring all three titles back to Turin.

"We're all experienced guys, men that know they have to find the ruthless streak needed to make this season become legendary," the centre-back told La Gazzetta dello Sport.

"We must recover the enjoyment in our hard work and get back to scoring goals. Now we must recreate the positive intensity.

"Everyone has to find the ruthlessness within themselves. It must be a wake-up call. It's useful to have a difficult game against a Lazio side that are doing well.

"It will need the best Juve if we are to meet the first of our three objectives."