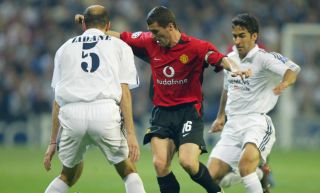 The legendary Manchester United captain made 480 appearances for the Red Devils after arriving from Nottingham Forest in 1993.

The Irishman rejected big offers from Juventus and Bayern Munich during his time at Old Trafford, where he won 13 trophies in a glittering 12-and-a-half years.

Keane's United career ended in acrimony after a falling-out with manager Sir Alex Ferguson, yet he could have swapped Old Trafford for the Bernabeu.

With a hip injury troubling him, he chose Celtic instead. But after just six months at Parkhead, which in Keane’s words was the "easier option", he hung up his boots.

When asked by FourFourTwo readers in the January 2015 issue why he turned down the Madridistas, he says: "I was 34 and my hip was hurting me. Maybe I took the easier option by going to Celtic – it was certainly easier on my body. If I had my time over again, then maybe, but I enjoyed being at Celtic.

“My regret was that I should have gone abroad earlier in my career. I could have signed for Juventus or Bayern Munich – I had much better financial offers from them – but at the time I wanted to stay at United. I felt at home at Old Trafford."

Read the full interview with Roy Keane in the January 2015 issue of FourFourTwo, available in shops and on iPad now. The magazine hails the Men of the Year, hears from Thomas Muller, Philipp Lahm and Manuel Neuer about Germany's World Cup triumph and listens to Gareth Bale and James Rodriguez narrate the images that defined their years. Plus, FFT examines the death of defending, gets the inside story on Sierra Leone footballers who must deal with paranoid teams and abusive fans as the Ebola disease sweeps the country, and recalls the days of the 'disco train' when British Rail's Football Specials became vehicles for violence in the '60s. Subscribe!