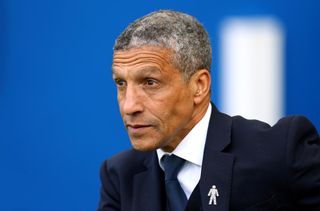 Anti-discrimination campaigners Kick It Out have issued an unreserved apology to Brighton following comments by head of development Troy Townsend concerning the departure of Chris Hughton.

The Seagulls achieved Premier League survival for the second season under Hughton, but he was sacked a day after their campaign ended with a 4-1 home defeat which saw Manchester City crowned champions.

Despite reaching the FA Cup semi-final, Hughton’s side managed just two league wins since the start of the year as they finished 17th, only two points clear of Cardiff in the final relegation place.

Speaking to The Daily Telegraph in reaction to Hughton’s dismissal, Townsend said the drive for more minority ethnic (BAME) coaches to be given opportunities was “now at worse than square one”.

On Wednesday, Kick It Out moved to draw a line under the row.

A statement read: “Kick It Out have unreservedly apologised to Brighton & Hove Albion FC, its chairman Tony Bloom, and the club’s board of directors and staff for any inference in comments made in an interview in the Daily Telegraph by Troy Townsend, the organisation’s Head of Development, that the club’s dismissal of Chris Hughton as its first team manager on Monday was in any way linked to his ethnicity – and also for the impact the comments have had on the club’s reputation and the reputation of its senior officials.

“Kick It Out and Troy Townsend fully accept that through its current employment of BAME coaches at senior levels, and the club’s long term engagement with, and support for Kick It Out’s various campaigns and events, Brighton & Hove Albion FC has fully demonstrated its commitment to eradicating discrimination of all types, and consistently provided opportunities for BAME coaches.

“Nobody at Kick It Out will make any further comment on this matter.”

Swansea boss Swansea manager Graham Potter is being widely reported as the man expected to take over at Brighton for next season.