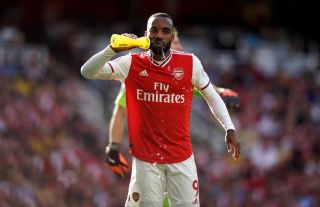 Arsenal striker Alexandre Lacazette will be sidelined until October with an ankle injury.

The 28-year-old had been playing through the pain, but has now been told to rest the problem.

A statement on Arsenal’s website said: “After assessments to an ongoing ankle issue, we have advised that Alex will need to rest and strengthen his ankle to regain full fitness.

“Alex has been playing through this injury for several weeks. He is likely to be back in action in October.”

Lacazette has scored two goals in three appearances this season, the last of which came in the 2-2 draw with Tottenham, when the Frenchman was replaced in the 67th minute.

Unai Emery insists Arsenal’s club-record signing Nicolas Pepe is ready to face Watford on Sunday after confusion over his fitness during the international break.

The 23-year-old played in the 2-2 draw against Tottenham before the Ivory Coast FA reported he had contacted them to say he had suffered an injury.

That claim was refuted by the Gunners and it was claimed he was purely working on building up his fitness.

Asked if Pepe was fit, Emery replied: “Yes, yes, he is training well and he is ready for Sunday.”

While Pepe is fit to play, fellow summer recruit Kieran Tierney is still not yet ready to make his debut.

The Scotland full-back joined from Celtic but has been sidelined by a groin problem – although he has stepped up his recovery in recent weeks.

Both he and Hector Bellerin will not be fit to make the short trip to Vicarage Road but Emery said there is a plan in place to ease the pair back into first-team action.

“They are now closer to us but they need to continue working and taking training with us for their fitness,” he added.

“They can feel very comfortable coming back to play with us, Kieran Tierney starting and Hector Bellerin coming back after his injury.

“It depends on their progress for the next weeks and maybe also we can decide to play at the beginning with the under-23s before, to be ready with us.

“Maybe if they play with the under-23s they can take confidence and better their rhythm and then after play with us 100 per cent.”

Meanwhile, Emery revealed he is close to announcing his five-man captaincy team for the new season.

The Spaniard likes to have a leadership group but lost Aaron Ramsey, Petr Cech and Laurent Koscielny over the summer – a trio who were part of that team last year.

Although not naming Granit Xhaka, the fact the midfielder has been captain for much of the season suggests he will remain with the armband, with the rest of the captains due to be revealed shortly.

We have a captain now,” he said. “We spoke this morning about that and in the next week we are going to take the decision on the five captains. I am going to decide to make it official in the next week.”