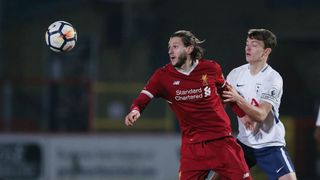 Liverpool star Adam Lallana was shown a red card on his return from injury for their under-23 side on Monday.

Lallana has not played since the defeat to Swansea City on January 22 after suffering a "little tear" in his thigh, and his comeback was cut short just past the hour when he reacted angrily to a challenge from Tottenham Under-23 captain George Marsh.

After the pair went up for a header, a furious Lallana jumped on Marsh's back and wrapped his hands around his throat, forcing referee David Rock to issue a straight red card.

Liverpool also had George Johnston dismissed in the 1-0 defeat, in which first-teamers Dominic Solanke and Danny Ings also featured.

It is not believed that Lallana will be suspended for any first-team duties.