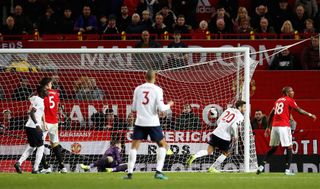 Substitute Adam Lallana saved Liverpool from a chastening loss at bitter rivals Manchester United in a pulsating Premier League clash which had its share of VAR drama.

Ole Gunnar Solskjaer’s side headed into this match as underdogs against Jurgen Klopp’s rampant side – little wonder given the visitors had won their last 17 league matches and the Red Devils were just a point off the relegation zone.

United have so often been the scourge of Liverpool at Old Trafford, though, and were on course for a memorable win thanks to Marcus Rashford’s contentious goal, only for late replacement Lallana to secure a 1-1 draw.

It was the first time Klopp’s men had dropped points since March 3, but this game was shaping up to be a whole lot worse for the table-topping visitors.

United dragged Liverpool into a scrap by playing with an intensity so often lacking this season, with their unusually resolute defence providing the platform for a break that saw Daniel James superbly cross for Rashford to turn home.

The visitors were furious that the video assistant referee allowed the goal to stand despite Victor Lindelof’s challenge on Divock Origi in the build-up – frustration that only grew when what would have been an equaliser by Sadio Mane was cancelled out for handball.

Liverpool were missing injured Mohamed Salah but looked sharper after the break and salvaged a late point as Lallana ghosted in at the far post to turn home Andrew Robertson’s cross.

Klopp’s team now have a six-point lead at the top of the table after United failed to capitalise on a bright start built on their three-man back line.

Axel Tuanzebe’s warm-up injury led to Marcos Rojo being brought into an experimental defence that Liverpool failed to seriously test as United started on the front foot.

Andreas Pereira hassled diligently behind Rashford and James, whose movement and directness was causing Liverpool’s defence a headache, although returning Liverpool goalkeeper Alisson Becker had precious little to deal with.

Mane caused panic down the right, but Roberto Firmino’s meek strike allowed surprise starter David De Gea, injured playing for Spain just five days ago, to save comfortably, with the United goalkeeper having to do far better when the Brazilian, this time offside, next got an attempt away.

But just as Liverpool looked likely to draw first blood, Rashford had Old Trafford rocking to its foundations.

Lindelof robbed Origi of possession and United broke, with James superbly sending over cross from the right that bamboozled Joel Matip and allowed Rashford to prod home from close range.

The home faithful erupted with joy as the Liverpool hordes fumed.

Incandescent that Lindelof was not pulled up for a foul on Origi, the visitors’ fury only grew when VAR gave the goal the green light.

Klopp was seething as chants of ‘Ole’ echoed around the ground, but they were replaced by Liverpool cheers in the 44th minute – albeit temporarily.

Mane collected a raking ball under pressure from Lindelof and continued to make the United defender look foolish, before slotting past De Gea. Immediately United claimed handball and within a minute Martin Atkinson was told by VAR to cancel out the leveller.

The cheer inside the ground was nearly as loud as for Rashford’s opener and Klopp ran down the touchline at half-time as he looked to change the dynamics.

Liverpool certainly returned with renewed hunger and intensity, but they found United hard to break down.

Alex Oxlade-Chamberlain dragged wide shortly after his introduction, but United were digging deep and sitting back.

Rashford fired just wide of Alisson’s goal after all too easily darting past Matip, with Fred twice flashing wide as the hosts enjoyed brief respite from soaking up pressure.

Andrew Robertson sent in a fine low cross from the left and Lallana was all too easily allowed to meet the ball at the far post, turning home and celebrating his first goal since May 2017 in front of the away support.

Trent Alexander-Arnold flashed over and Oxlade-Chamberlain went close as Liverpool pushed for a winner that proved just out of reach.