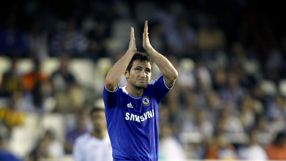 Spanish and European champions Barca had to fight hard to secure a 2-2 draw against Valencia in La Liga, but the Spaniards looked nervous against the London club, who squandered a slew of chances and gifted their opponents a late penalty through Salomon Kalou's handball.

Lampard, who was left on the bench against Swansea City at the weekend, had earlier provided the perfect response to speculation about his future with a fine strike shortly after half-time.

"They [Valencia] are a fantastic team," the 33-year-old England midfielder was quoted as saying on Chelsea's website.

"We watched the video from when they played Barcelona and we out-Barcelona'd Barcelona in a way, played great football and we were very aware of what they could do tonight," he added.

"We sat back a bit after the goal, you know against a team of quality you're going to suffer at some points, and probably a draw was a fair result."

The stalemate leaves Chelsea at the top of Group E with four points from two matches. German side Bayer Leverkusen are second on three points thanks to their 2-0 win at home to Genk, Valencia have two points in third and Genk one point in fourth.

Lampard said he hoped his goal, his 20th in Europe's elite club competition, would signal a turnaround in his fortunes.

"I always want to play, that's a given. I've been like that throughout my career," he said.

"I love playing for this club. I am very proud of playing here. I've had knocks before in my career [and] it makes me work harder to come back.

"I like to play games and get momentum, I don't always start the season out of the blocks and hopefully now I can get a run of games.

"It was a sweet moment, the season hasn't quite got going for me yet for a few reasons, so to come here in a game like this and score a goal is the start of a big season for me.

"I tried to keep it down and it was a nice feeling to see that one hit the net."