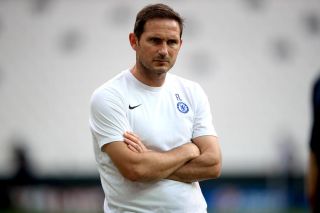 Frank Lampard is determined to secure his first win as Chelsea manager and finally lift the UEFA Super Cup – although fresh doubts over N’Golo Kante hardly provide the ideal preparation.

Just days after his first match in charge ended in a galling 4-0 defeat at Manchester United, the Blues’ all-time top scorer will attempt to mastermind victory against Jurgen Klopp’s Reds in Istanbul.

Chelsea secured their place in the Turkey showpiece by winning the Europa League under Maurizio Sarri and successor Lampard is looking to finally taste Super Cup glory after twice going close during his playing days.

“It means a lot to the club,” the Blues boss said. “I know first-hand because we lost two!

“We lost to Atletico Madrid in poor circumstances and we were far, far off and gave them the Super Cup.

“We were unfortunate to lose to Bayern Munich. When you work hard to get into this game between two champions, it is important that at a club like Chelsea we give everything to win it.

“It does mean something. It means something to us as a club because it is as another trophy.

“And for me it would be a really nice start for me personally, but more than that a really good feeling for the players with the season coming up that we can compete with Liverpool.

“If we could win a cup that goes down in our history we can go on from there.

“Certainly we understand the importance of it.”

Chances of victory could well be hampered by the absence of Kante, who 11 weeks ago somehow overcame a knee injury to play the entirety of the 4-1 Europa League final win against Arsenal in Baku.

That issue has led to a disrupted pre-season for the France international, who has picked up a fresh knock after coming off the bench at Old Trafford on Sunday.

“The selection of N’Golo Kante on the bench was purely because he had an injury which caused him to miss a big part of pre-season and his off-season because he was injured throughout,” Lampard said.

“So, he wasn’t ready for the game – but I’m aware of how important he is to us. He also picked up another small injury in the game which again is a danger if you try to bring players in, so we are assessing that ahead of the game.

“We need to make a decision on him. He has a small injury which we are concerned about and we will have to decide with him on that this evening. Can he play or not? He’s had a very broken pre-season.”

Kante trained with the rest of group at Besiktas Park on the eve of the game, as did Willian and Antonio Rudiger who Lampard felt was important to have with the group as they continue their road to full fitness.

A number of young talents were also involved on the eve of the Super Cup and Lampard vowed to continue to put his trust in youth, despite a harsh lesson for the likes of Mason Mount and Tammy Abraham against Manchester United.

“With regards to picking inexperienced or experienced teams, I completely pick the best team I see to win the game regardless of age,” he said.

“I think it’s very important to have a competitive team.

“Yes, if young players are showing what they can do in training and deserve their chance – for example, Mason Mount deserves his chance completely on merit as opposed to age I will have no fears to play young players because it’s important for a club like Chelsea that we do that.

“But they need to deserve their chance. In terms of how we set up as a team, I really liked some of our aggressive off the ball work against United.

“We won the ball back a lot and it was more we didn’t finish off the opportunities we got from that that lost us the game. But we have to be slightly adaptable.

“We have to respect the strengths of the team we are playing. And Liverpool is a different challenge to Man United, that doesn’t mean we are willing to concede ground or defend our own box.

“There may be subtle changes in our approach but what has to stay is the intensity of our work rate.”