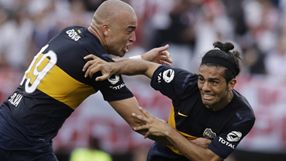 The match started in party atmosphere at a packed Monumental with the traditional ticker tape welcome when the players took to the field, but degenerated into sporadic incidents of violence after the final whistle.

"There were 25 people hurt but no-one has died," Alberto Crescenti of the state emergency medical service told sports daily Ole after rumours circulated that two security guards had been killed in an attack by Boca fans.

"There is no-one in critical condition... although some people have been taken to hospital," added a spokesman for the private firm that provided security personnel at the giant 1978 World Cup stadium.

River fans were distraught after Boca avoided what had looked certain defeat and maintained their bragging rights over their arch-rivals, who were relegated last year and have not won a derby since November 2010.

Midfielder Erviti's scrambled goal came from a quick break after the Boca defence had blocked a shot at the other end from River captain David Trezeguet, who was attempting to mark his first big Buenos Aires derby with a goal.

"The goal is important because of the difficult times Boca is having," Erviti told reporters, referring to his team's poor form with only three points from their last five matches.

A packed Monumental was treated to plenty of excitement but only glimpses of quality football.

River shocked Boca by scoring from a first-minute free-kick and added a superb second goal before Boca hit back twice in the last quarter-of-an-hour.

Midfielder Leonardo Ponzio repeated his trick of River's previous home match when he hit a right-footed free-kick from 30 metres out on the left inside the near post with goalkeeper Agustin Orion reacting too late.

Nippy Uruguayan striker Rodrigo Mora, a thorn in the side of Boca's defence throughout the match, put River two up in the 70th minute with a superb shot from a tight angle on the right.

River had been forced to make two substitutions in the first half after defender Ramiro Funes Mori and midfielder Martin Aguirre both suffered knee ligament damage.

The referee delayed the start of the second half for several minutes until River fans had removed a giant inflatable pig in Boca colours they had paraded at half-time.

Boca are sixth with 19 points from 12 matches, three more points than River, who hosted the first competitive derby against their arch-rivals in 17 months following their relegation in June 2011.

Newell's were a man short for 30 minutes after former Argentina defender Gabriel Heinze was sent off for a second booking.

Velez Sarsfield, who beat Racing Club 1-0, are second with 23 points. Belgrano are third with 22 points after a 1-0 home win over Union in Cordoba, Racing fourth with 21 and Lanus fifth after beating Argentinos Juniors 1-0.