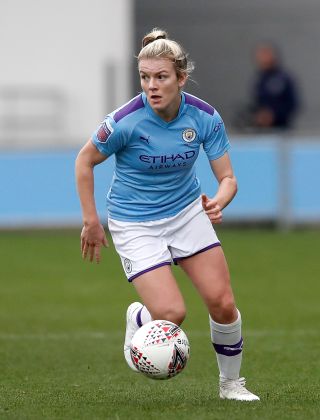 Lauren Hemp says Manchester City are “even hungrier” for success in the forthcoming season given the way the 2019-20 Women’s Super League ended.

The campaign was brought to a halt by the coronavirus pandemic in March with leaders City a point clear of second-placed Chelsea, who had a game in hand.

In May it was announced the season would not be restarting, and the following month, with the table being determined on a points-per-game basis, Chelsea were confirmed as champions and City as runners-up.

The @FA has announced that the 2019/20 #BarclaysFAWSL table has been decided on a basic points-per-game basis, with the title awarded to @ChelseaFCW.— Barclays FA Women's Super League (@BarclaysFAWSL) June 5, 2020

The 2020-21 season is set to start on September 5 and City – with a new boss in Gareth Taylor after he replaced Nick Cushing – have been back in training since early July.

“Credit to Chelsea, they had an excellent season. They have some really top players that I’ve been lucky to be able to play with at international level, so we’re also friends and it’s nice to see them do well.

“But I think it also makes us even hungrier to win it this year and show it was sad how things ended last season but we’re ready to give something back to the fans.

“We’d all love to win trophies, and that’s what we’d been working the whole season towards, and I think this season that’s exactly what we’re going to do.

“We’re there in all the competitions, we want to win them all and I think as a team we’re all hungry.”

Hemp has had an impressive past 12 months individually, following up her goal in City’s 3-0 2019 FA Cup final victory over West Ham with performances across 2019-20 that earned her a WSL player of the season nomination.

The 19-year-old, who joined the club from Bristol City in 2018 shortly after being named PFA young player of the year, said: “The goal at Wembley kind of kick-started things for me at City.

“Things went well for me, I contributed a few goals and assists, and I’m hoping to continue that, if not do more this season.

“Being nominated for awards gives me more confidence. It’s exciting to see how much I can improve because of how far I have still got left to go.”

The past year also saw Hemp make her senior international debut, in a 1-0 away win against Portugal in October, and her subsequent time as a Lioness has certainly proved eventful.

England have played five more matches since then with Hemp adding four more caps, including two at this year’s SheBelieves Cup, the team have registered more defeats than victories, and in April it was announced boss Phil Neville would not be staying in charge beyond the end of his current contract, which runs to July 2021.

Asked about her time with England, Hemp said: “I’ve been lucky enough to have the opportunities I have.

“Coming on against Portugal and making my debut at 19 was a nice feeling, and I’m just looking to keep getting these opportunities.

“It’s exciting what’s to come in the next three to four years (an Olympics, a home Euros and a World Cup). I’d love to be involved in that, but it starts with my club.

“Its disappointing Phil’s not carrying on because he put his trust in me and gave me the opportunities he has, but we’ve still got time with him and I’m looking forward to hopefully being part of future England squads.”