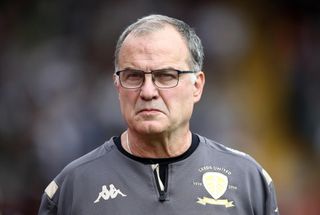 Marcelo Bielsa admitted Leeds rode their luck as they narrowly beat West Brom 1-0 to overtake them at the top of the Sky Bet Championship.

Ezgjan Alioski scored the only goal, via a deflection off former Leeds defender Kyle Bartley.

Albion bossed the majority of the second half but could not find a way past a stubborn home defence.

Bielsa admitted: “It was big big effort from the team tonight.

“We tried to manage the match, but at the end West Brom’s creative play was difficult to defend.

Bielsa made a bold decision to replace Tyler Roberts, who had come on himself as a substitute at the start of the second half, with defender Luke Ayling in the closing stages.

And the Argentinian defended his decision, saying: “The change was not for his (Roberts) performance. He worked a lot but the shape of the match turned and changed.

“I was forced to make the change to put a more defensive player on the pitch.”

For West Brom boss Slaven Bilic it was a maiden loss in the Championship since he arrived in the summer.

“I’m very disappointed with the result but I’m proud of how we played second half,” said the Croatian.

“We knew who we were playing and we talked about this as a big opportunity.

“They (Leeds) were more aggressive in the first half and scored a goal. But in the second I didn’t see Leeds for a long time.

“I think we definitely deserved one goal and I’m disappointed that we didn’t take any of these chances.

“But it’s important we don’t lose focus or belief.”