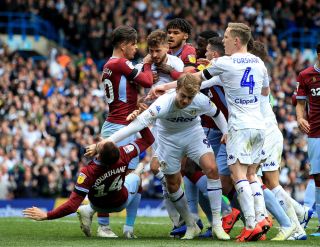 Leeds forward Patrick Bamford has been charged with “successful deception of a match official”, the Football Association has announced.

Bamford clutched at his face during a mass altercation between Leeds and Aston Villa players during a heated Sky Bet Championship match at Elland Road on Sunday – with Villa’s Anwar El Ghazi sent off as a result.

There was no contact made between El Ghazi, whose red card has been rescinded, and Bamford – who has now been hit with an FA charge and faces a two-match ban which could see him miss the first leg of Leeds’ play-off semi-final.

Both clubs have also been charged with failing to ensure their players conducted themselves in an orderly fashion during the 72nd minute as a ruckus occurred after Mateusz Klich had given Leeds the lead.

A statement from the FA read: “Anwar El Ghazi will be available for Aston Villa’s next three matches after a claim of wrongful dismissal was upheld by an Independent Regulatory Commission. The forward was sent off for violent conduct during the EFL Championship fixture against Leeds United on Sunday [28/04/2019].

“Patrick Bamford has subsequently been charged with ‘successful deception of a match official’. It is alleged the Leeds United player’s behaviour in the 72nd minute of the fixture, which involved committing a clear act of simulation that led to Anwar El Ghazi being dismissed, amounts to improper conduct. The forward has until 18:00 on Wednesday [01/05/2019] to respond to the charge.

“In addition, Leeds United and Aston Villa have been charged with a breach of FA Rule E20. It is alleged they failed to ensure their players conducted themselves in an orderly fashion during the 72nd minute of the fixture. Both clubs have until 18:00 on Friday [03/05/2019] to provide a response.”

Leeds boss Marcelo Bielsa instructed his players to allow Villa to score an equaliser from the kick-off as the game finished 1-1 and ended United’s hopes of gaining automatic promotion to the Premier League.

Instead, Bielsa’s side will go into the play-offs after Norwich and Sheffield United secured the top two positions in the Championship.

The FA also said that an incident involving Villa’s Conor Hourihane was considered “not seen” by a panel of former referees but that the governing body deemed it not to be violent conduct so no further action would be taken.