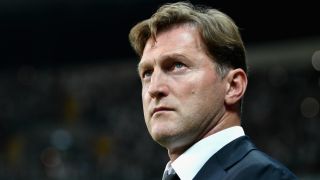 RB Leipzig coach Ralph Hasenhuttl conceded his team struggled to cope with Besiktas' intense home support as they lost 2-0 on their maiden Champions League away trip.

The visitors fell a goal behind inside 11 minutes in Istanbul and never recovered, conceding a second on the stroke of half-time as they slipped to a first defeat in Group G.

After a raucous first 45 minutes, the drama took another twist when the Vodafone Park floodlights went out for a period in the second half and halted the visitors' burgeoning recovery.

But Hasenhuttl, who led Leipzig to second in the Bundesliga last season, admits the damage was done during a frenzied opening.

"It is impossible to prepare your team for an atmosphere like this. There was a deafening noise [and] at the start of the game we were a bit affected," he said after the match.

"We were not good in the first 20 minutes at all. But it was a lesson for all of us. I saw who I can count on in times like these. This is a lesson for us to learn and we keep learning.

"In the second half, my players stepped up and had chances but it was not enough. I congratulate Besiktas and they got a deserved win."

ImprovisationFrom signing players by using a phone, to lighting up a stadium - hats off to the fans September 26, 2017

Besiktas' victory means they are well on track for a debut appearance in the knockout stages.

The Turkish champions are three points clear of second-placed Porto, a start coach Senol Gunes is confident of cementing.

"Six points in two games is a really good start but this is no guarantee," he said.

"But if we get two points, or one win against Monaco in the back-to-back games, we will put ourselves in a really good position."