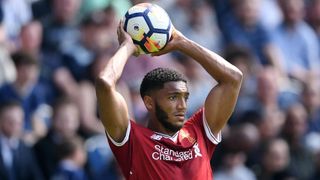 Liverpool's Champions League win over Paris Saint-Germain proved they are on a par with Europe's best, according to Joe Gomez.

Jurgen Klopp's side had seen a two-goal lead slip away at Anfield as Thomas Meunier and Kylian Mbappe cancelled out efforts from Daniel Sturridge and James Milner.

However, Roberto Firmino - emerging from the bench following his eye injury - struck in stoppage time to seal a thrilling 3-2 triumph.

And defender Gomez, who lauded the Reds' strength in depth, felt the result had sent a clear message, particularly after Saturday's 2-1 victory at Tottenham.

"I think this year we're confident as a team," he said. "The squad is so strong as a unit. With Bobby [Firmino] obviously struggling, Studge [Sturridge] comes in and scores for us. It shows we have so much quality.

"Obviously it's big for us to compete against teams like that, but we see ourselves at that level. We have to.

"Although we see ourselves [that way], we have to make the point. And that's what we've done by beating both of them [Spurs and PSG]."

The triumph extended Liverpool's perfect start to the 2018-19 season, but Gomez warned against complacency.

"We've got a tough few games coming up - Chelsea, who have a 100 per cent record, and Southampton at the weekend," he said. "No game is easy. We have to keep going."