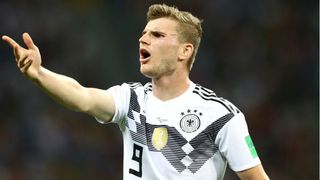 Timo Werner may still be waiting for his first goal in Russia but the Germany forward insists "no money in the world" can replace representing his country at a World Cup.

The RB Leipzig forward has started for Joachim Low's side in their two Group F fixtures, though he failed to find the net against Mexico and Sweden.

However, Werner did play a key role in Germany's thrilling 2-1 victory over Sweden in Sochi, winning a free-kick in stoppage time that led to Toni Kroos' match-winning strike.

While keen to break his duck at the tournament, the 22-year-old's main concern is making sure the reigning champions progress through to the knockout stages.

"As a striker you want to score, but this is my first World Cup and I've experienced walking into the stadium twice now and no money in the world can replace that.

"I've played in the Champions League, but it still doesn't compare.

"If goals are added to my experience, it's a nice bonus, but what is most important is that we keep progressing in the tournament."

Timo and having fun at today's press conference June 25, 2018

Werner - who admitted he was too tired to join in the celebrations after Kroos' dramatic goal - started against Sweden in a central role but was moved out wide for the second half to accommodate the introduction of Mario Gomez.

It remains to be seen if Low will pick the duo from the start for the final group game with South Korea on Wednesday, but Werner is willing to adapt if it benefits the team.

"With regards my position, I'm a striker so my favourite position is through the middle," he said. "But when we play a team that sit as deep as Sweden did, playing wide allows you to pick up some more momentum running at defenders.

"It's always nice when the ball comes to your feet and you have space to run into. My pace is something that we can utilise well in wide positions."

As well as offering a more physical presence on the field, veteran Gomez is also having a positive impact on his young team-mate.

"For me, personally, I've had a lot of support. He [Gomez] is always the first one to come to me, give me support and offer tips," Werner said of his fellow striker.

"When things aren't going your way, a player like him can be so important. You can also see after the game how happy he is, whether he's played or not."