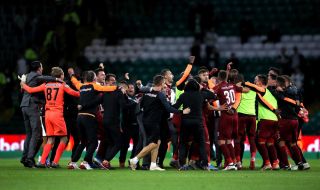 Celtic have the chance to avenge August’s Champions League qualifying defeat to Cluj when the teams meet at Parkhead on Thursday.

Here, the PA news agency takes a look at the Romanian side ahead of the second group game of Celtic’s Europa League campaign.

Celtic’s only previous meetings with Cluj came less than two months ago and left a bitter taste in the mouths of the Parkhead faithful. After the first leg of their Champions League qualifier finished 1-1 in Romania, Cluj triumphed 4-3 in Glasgow as George Tucudean scored with the last kick of the game to dash Celtic’s hopes of reaching the group stage of Europe’s premier competition. But Cluj also dropped into the Europa League after a 2-0 aggregate defeat by Slavia Prague in their play-off. Celtic will be looking to banish the memory of their only defeat of the season so far by taking all three points.

Dan Petrescu is a well-known figure after spending eight years of his playing career in the Premier League – first for Sheffield Wednesday, before going on to represent Chelsea, Bradford and Southampton. In a successful five-year spell with Chelsea he won the FA Cup, League Cup and European Cup Winners’ Cup. He also won 95 caps for Romania and appeared at two World Cups and two European Championships. The 51-year-old has racked up an extensive coaching CV since retiring from playing duties, with spells working in Poland, Russia, Qatar, China and the UAE. Petrescu returned to his homeland in 2017 and has since guided Cluj to back-to-back league titles.

Frenchman Billel Omrani bagged a brace in Cluj’s 4-3 win at Celtic Park and was on target again as the Romanians began their Group E campaign with victory over Lazio, netting the winner in a 2-1 triumph. Omrani also scored at the weekend after coming on as a substitute, but was injured in that game and could miss out. Celtic will also need to be wary of in-form Ciprian Deac, who opened the scoring at Parkhead.

Formed as the official team of the Romanian state railway in 1907, Cluj had to wait over 100 years to win their first top-flight title, which came along in 2008. Cluj have gone on to claim the Romanian championship a further four times in the last decade.