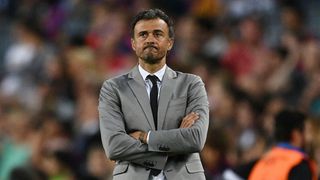 Luis Enrique has rejected claims in the Spanish press that Barcelona's players already know the identity of his replacement.

The 47-year-old announced in March he would leave Camp Nou at the end of the 2016-17 campaign, bringing the curtain down on a tenure that has yielded eight trophies.

It will be nine if the Blaugrana can overcome Alaves in the Copa del Rey final on Saturday, Luis Enrique's final game in charge of the club he played 264 times for as a player.

Ernesto Valverde has been touted as Luis Enrique's replacement after his exploits with Athletic Bilbao, while current Barca assistant Juan Carlos Unzue has also been mentioned.

Barca chairman Josep Maria Bartomeu hinted the new boss will be appointed on May 29, with El Correo claiming Valverde has already agreed a deal and the players have been informed.

However, Luis Enrique rejected that report and suggested Barca fans should not believe everything they read in the media.

"There has been no communication in that sense," he said after Sunday's 4-2 LaLiga win over Eibar.

"And on top of that I don't think you should trust in the media because the majority of them lie more than they speak."

Barca missed out on a third successive league crown at the weekend as Real Madrid pipped them to the title by three points.