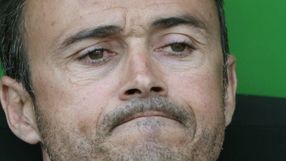 "His work was good. At a certain point it wore him out and he felt the need to stop," general director Franco Baldini told Sky. "He won't be training anywhere next season.

"We invited him to take all the time he needed to decide, hoping right until the end that he would stay."

Italian media had reported Luis Enrique's departure on Thursday, after a video surfaced of him apparently saying to goodbye to the players at the club's training ground, but neither Roma, nor the coach himself, confirmed the news.

The season has been a tough one for Roma, whose new owners, led by American Thomas DiBenedetto, put the Spaniard in charge of a long-term project that they hoped would make the club as successful as the big three of AC Milan, Juventus and Inter Milan.

However, the club have suffered 14 defeats, are seventh in the league with one game to play and may not qualify for Europe next season.

The club remained publicly supportive of Luis Enrique but it was clear that pressure from fans and the local media irritated him.

Baldini said the club was committed to a flamboyant style of play which would continue under the new manager.

"The project hasn't failed, we want to carry on playing a certain type of football, and from league statistics Roma is the team that has had more possession than any other, and is third behind Juve and Milan for territorial dominance and pass completion.

"This says a lot about the quality of play. The failure has been how our league campaign went, but the style of play was want we wanted from the beginning.

Former Roma striker Vincenzo Montella, who coached the club in the second half of last season after Claudio Ranieri's departure, has been tipped to take Luis Enrique's place but Baldini said the club had not yet lined up anyone.

"I don't know [about Montella]. From when we knew that Enrique was leaving we have thought about alternatives, but we haven't had the time to contact anyone.

"I don't know how long it will be before we know the name of our new coach, [but outgoing Barcelona coach Pep] Guardiola would be science-fiction."