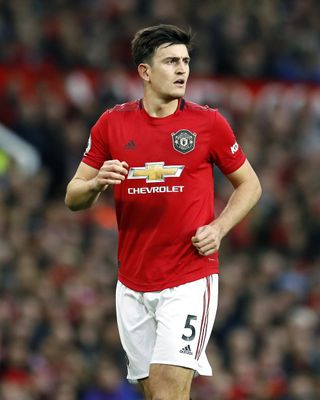 Harry Maguire is hopeful there will be no repeat of the “sickening” racist abuse endured in Bulgaria when Manchester United line up at Partizan Belgrade, but the squad have spoken about UEFA’s protocol ahead of the Europa League encounter.

The world’s most expensive defender was on the field during a night of shame in Sofia, when Nazi salutes and monkey chants overshadowed a 6-0 walkover win for England on October 14.

Maguire and Marcus Rashford’s first trip since then comes on Thursday night in the Europa League in Serbia – a country facing well-documented issues with racism.

UEFA this week hit the country’s federation with a two-match ban on spectators, the second of which is suspended for a 12-month probationary period, after racist behaviour in September’s defeat by Portugal in Belgrade.

Furthermore, Partizan will be playing in front of a full house against United after completing a two-match European stadium sanction for racist behaviour.

Maguire said: “We will trust UEFA to follow their protocol with the three steps.

“Obviously Sofia was a sickening atmosphere, it was something I don’t want to be part of again.

Checking in for our flight to Belgrade 🧳#MUFC#UELpic.twitter.com/QHodqxL6BW— Manchester United (@ManUtd) October 23, 2019

“We’re positive tomorrow night will be a great atmosphere, one we’re all looking forward to playing in.

“If something does goes off, then we’ll follow the three-step protocol and I’m sure there will be people on and off the pitch doing their bit to make things better for the future.”

Partizan manager Savo Milosevic urged fans to behave at the weekend and said on the eve of the game that he was hopeful that no such issues will rear their head when United visit.

The former Aston Villa striker expects Thursday to be a “celebration of football” – something United boss Ole Gunnar Solskjaer hopes proves correct, although he has spoken to his squad about UEFA protocols.

“In the aftermath of what happened in Bulgaria we had a meeting with the boys and, as Harry said, we’ve gone through the protocol,” he said.

“But I believe in people and I’m sure the atmosphere here will be fantastic, we’ll try and keep them quiet by playing good football.

“We trust UEFA and, as Savo said, hopefully it’s a celebration of good football.

“We’ve spoken in general on subjects but of course Harry and Marcus who were in Bulgaria, they were freer to talk about the atmosphere, how it was, what we can expect, what’s the worse cast scenario.”

The FARE (Football Against Racism in Europe) network is reported to be keeping a close eye on the game in Belgrade – but it is not just the Balkans where these problems are arising.

The FA Cup match between Haringey Borough and Yeovil was abandoned at the weekend due to racist abuse, while United identified and banned a supporter over alleged racist abuse during Sunday’s Premier League game against Liverpool.

The supporter was ejected from Old Trafford for what the club called “completely unacceptable” abuse.

Solskjaer said: “I’m happy the club have identified… yeah, what do you want to call him.

“It’s something we feel strongly about and are going to stamp down on as much as we can.”