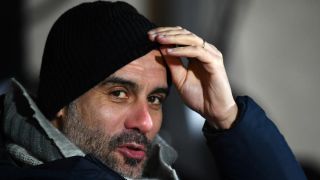 Pep Guardiola could not rule out the possibility that Manchester City will have to win all their remaining Premier League games to overhaul Liverpool in the title race.

Speaking ahead of Tuesday's trip to Newcastle United, the City manager acknowledged Jurgen Klopp's side were unlikely to drop many points.

The Reds have a four-point cushion at the summit, although their next match at home to Leicester City is not until Wednesday, so the reigning champions have a chance to cut the gap.

City reached the 100-point mark last season and Guardiola was asked if a similar feat may be required to retain their crown.

"I would say it's not breaking the record, that doesn't matter, but we'll have to win a lot of games. They'll not drop too many," said Guardiola, whose side would rack up 101 points if they win their last 15 matches.

"I don't know what we need to do, I'm sure we'll have to win a lot. We are going to try to be there.

But the former Barcelona boss had little time to muse on what the mood was like in the Anfield dressing room, insisting the focus had to be on City's results.

"I don't know what they think, I'm not in Jurgen's locker room. All we can do is win games and make them feel City is always there, it's all we can do," he said.

Newcastle are fighting for top-flight survival and Guardiola is taking nothing for granted against Rafael Benitez's men.

"We have to prepare for everyone. Newcastle change system in the last 10 or 15 minutes, the spectators want that. The stadium is incredible," he added.

"They can create chances from nothing. I won't say they always defend, they can make high pressing, in the same time they can change immediately."