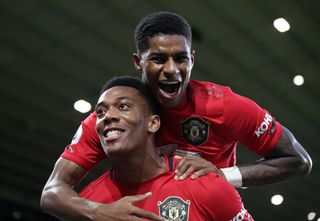 Rashford and the fit-again Martial both responded to missing penalties at Carrow Road by scoring from open play in United’s 3-1 away win on Sunday, with the duo combining brilliantly for the latter’s strike.

It was the first time Solskjaer’s side had scored more than one goal in a game since the 4-0 win against Chelsea on the opening day of the Premier League season.

But their former team-mate Solskjaer had a different partnership from the club’s 1999 treble-winning season in mind when the comparison was put to him, joking: “It’s (like Teddy) Sheringham and Solskjaer!

“It was great to see them link up. Of course we’ve missed Anthony in the last two months and it’s great to have him back and him and Marcus – that partnership is just going to improve and grow.

“Sometimes we play the two of them, today we had Dan James as well – we had the three of them – so very happy and a great finish by Anthony.”

But United’s penalty problems resurfaced when first Rashford and then Martial had first-half spot-kicks saved by Norwich goalkeeper Tim Krul.

The Red Devils have now taken seven penalties this season but converted only three.

Solskjaer admitted after the game VAR was wrong to award his side the first one for a foul on James, but he claimed Krul should have been penalised for being off his line when he kept out both efforts.

He said: “It’s like the six-second rule with the keeper when he holds the ball in his hands, that was used for a couple of months and it’s out of the window.

“This as well on penalties, he’s a yard off his line and we looked at it the first month and now it’s gone.”

The 26-year-old, who became the first Cuban player to score in the Premier League with his late consolation, said: “Oh my God – I said to him: ‘Man I never saw a goalkeeper holding two penalties in the game’. I’m so proud of him, he was really good.

“Of course (he is important), you feel it every time in the training session, everywhere, when he comes in he speaks with a lot of the young players, and he is a very good character that we need in our team.”

Hernandez was not as impressed with the display of United despite their victory, though, and rued a missed opportunity for Norwich.

Hernandez added: “When you see Manchester United – really I expected more from them because it’s a big club with big names.

“I think in the first 15 minutes, if we use our chance then really the game looks completely different.”