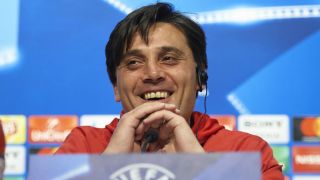 Vincenzo Montella joked that Sevilla's best hope of nullifying Alexis Sanchez on Wednesday will be to "kill" the Manchester United star.

Sevilla host United in their Champions League round of 16 first leg in a tie the Premier League side are favourites for.

The match will likely see Sanchez make his first appearance in the competition for United following his January move from Arsenal, and he appears to have settled in quickly.

Sanchez claimed an assist in United's 2-0 FA Cup defeat of Huddersfield Town on Saturday and has generally looked lively in the majority of his outings since leaving the Gunners.

As such, Montella suggests Sevilla might have to cross the line in order to stop him at the Ramon Sanchez Pizjuan.

"Maybe we could kill him or knock him down or something," Montella quipped in his pre-match news conference on Tuesday.

"I remember Sanchez really well from his time in Italy [with Udinese]. He has improved a lot his style in his career and he's a really good player in terms of the transitions and finding spaces, and has a really good speed in attack."

"I don't know how many matches Mourinho has played in this competition," Montella added. "More than 100 I think, but we will be ready to play this match.

"I'm very excited because he was a pioneer in his way of working. I've read his books, I've studied his tactics. He's undoubtedly a coach you have to study.

"It's a challenge to beat Mourinho, but it is a pleasure to prepare for this type of game. I hope that tomorrow we will be better [than United]. I am happy with this moment for the club, for the players, for the fans."

Sevilla did have injury concerns before training on Tuesday, but Joaquin Correa and Ever Banega have both been passed fit in two significant boosts for Montella.

"Correa is fine," Montella confirmed. "On Monday he did not finish training as a precaution, but today [Tuesday] he has completed it. He can play, as can Banega."