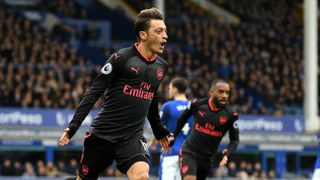 Per Mertesacker hailed the contribution of Mesut Ozil after his German compatriot played a starring role in Arsenal's 5-2 demolition of Everton in the Premier League on Sunday.

Ozil, who has been heavily linked with a move to Manchester United in recent days, scored his first goal of the campaign to put the Gunners 2-1 up in the 53rd minute before registering a first assist when he teed up Alexandre Lacazette for his side's third after 74 minutes.

Mertesacker was full of praise for the midfielder and believes the ruthless finishing of his team-mates was the deciding factor in their resounding win, which marked manager Arsene Wenger's 68th birthday in style after the visitors had fallen behind to Wayne Rooney's opener at Goodison Park.

"We started really well, but to go 1-0 down was difficult," he told Sky Sports.

"But we stuck to the game plan and created a lot of chances. We spoke at half-time that we needed to execute them better and our guys up top did it, and that was crucial. The way Mesut played, created chances and got the goal was crucial.

"We created chances from the start, we just lacked execution. We knew that they were under pressure and we took advantage."

The clash on Merseyside was the first time that Ozil and Lacazette have started a league game together since the latter's arrival from Lyon, but the former Real Madrid star was not surprised at how well they linked up.

"In training we always show our quality together and today on the pitch we played very well from the start until the end," said Ozil. "We showed our quality in front of the goal."

Arsenal climbed to fifth with the win, behind London rivals Chelsea on goal difference.