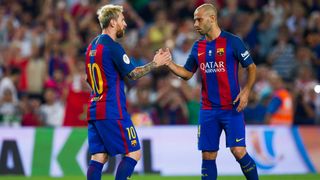 Lionel Messi and Xavi are among the players to have paid tribute to Javier Mascherano ahead of his move from Barcelona to Hebei China Fortune.

The 33-year-old's time at Camp Nou will come to an end on Friday, when he officially joins the Chinese Super League side in a deal that will reportedly see Barca earn €10million.

The Catalan giants held a special farewell event for Mascherano on Wednesday, with the first-team squad and president Josep Maria Bartomeu present, and he will say goodbye to fans at the Copa del Rey quarter-final second leg against Espanyol on Thursday.

Barca compiled a video of good luck messages from first-team stars including Andres Iniesta, Sergio Busquets, Samuel Umtiti and Messi, and the Argentina star later sent another message via Instagram.

"Masche, after so many matches and moments together, words are not enough," Messi wrote.

"You know I'm going to miss you, it will be strange to come to the dressing room and not see you sitting by my side. But we are going to the national team soon.

"A big hug for all three of you, I wish you all the best."

Former Barca star Xavi sent in a video message of his own via the club's TV channel, in which he said: "I just wanted to thank you for everything you've given to the club. I think you've been an incredible example of what it means to be a team-mate and a professional.

"I think a lot of foreigners who come to play for Barca should follow your example, how you've adapted, and the mark you've made on the dressing room, above all on a personal level and, of course, on a professional level, too.

"I think you've set an example in every area. So, I wish you nothing but the best.

"I also want to say it's been a pleasure to share so many things with you and to have played alongside you."

Speaking at Wednesday's event, an emotional Mascherano said: "I fulfilled a dream coming to Barca and now it is time to wake up.

"My time here lasted more than I thought, seven and a half spectacular seasons with a fantastic group in the dressing room."

Mascherano, who signed from Liverpool in 2010, won a host of major trophies during his time in Spain, including four LaLiga titles, four Copas del Rey and two Champions Leagues.