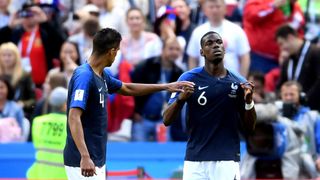 Lionel Messi, Cristiano Ronaldo and Neymar would have all been allowed to keep Paul Pogba's reclassified World Cup goal, according to former France international Patrice Evra.

Pogba hit a deflected winner as Les Bleus opened their Russia 2018 campaign with a 2-1 victory over Australia, but FIFA have belatedly marked the strike down as an own goal from Socceroos defender Aziz Behich.

The midfielder came into the World Cup after a difficult season with Manchester United but got his tournament off to a memorable start after also helping create France's first goal, an Antoine Griezmann penalty.

Evra - who played alongside Pogba for France - believes the 25-year-old comes under unfair scrutiny for his image and that more time should be spent discussing his qualities on the pitch.

"I ask people to stop hating my PauI," Evra told ITV. "I know he is doing his hair but let's talk about football.

"I would like to know if Messi or Ronaldo or Neymar scored the goal would they take it away from them? That is just my point of view."

Evra claimed the United midfielder is performing at a higher level than he did in Serie A with Juve, where he won four straight Serie A titles.

"The problem with Paul is that his image is getting bigger than his football," Evra said. "Even when the game starts people are already angry and already criticising him - about his hair, about his style, about his fashion. We never talk about his football, we talk about a lot of other things.

"The expectations with Paul are too high - maybe that's the problem. When you see his statistics from when he played at Juventus and now for Manchester United, they are better at United.

"I think because they bought him for a lot of money, people expect Paul to score three goals every game but maybe he's not at that level. When the game goes wrong, they point at Paul first and I don't think that's fair. Give him time, he's still young."

Pogba is likely to line up for France when they continue their Group C campaign against Peru at the Ekaterinburg Arena on Thursday.