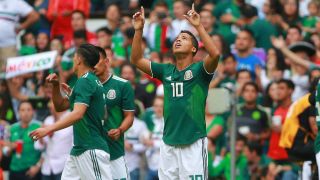 Giovani dos Santos scored the winner as World Cup-bound Mexico ended their drought with a 1-0 win over Scotland in an international friendly at the Azteca.

Mexico had failed to score in their past two winless matches following Monday's goalless draw against Wales in California but Dos Santos ensured the hosts were back among the goals and winners on Saturday.

Dos Santos scored his 19th international goal when his perfectly placed shot from just inside the box found the bottom corner of the net, having combined with Carlos Vela in the 13th minute.

Mexico were the superior side – despite Oliver McBurnie's header hitting the post – and they could have won by more if not for the woodwork denying Miguel Layun in the first half and Hirving Lozano with 26 minutes remaining in Mexico City.

Juan Carlos Osorio trimmed his World Cup squad before the match, with Jesus Molina, Jurgen Damn and Oswaldo Alanis cut from the Mexico roster, with one more axing to come before the showpiece tournament, where the Mexicans will face reigning champions Germany, Sweden and South Korea in Group F.

The pre-game announcement meant Osorio made seven changes to the team that drew with Wales, Dos Santos, Vela, Layun, Raul Jimenez and Carlos Salcedo among the players back in the XI.

Scotland, who were beaten 2-0 by Peru last time out, were youthful and inexperienced – substitute Charlie Mulgrew the only player with more than eight caps in the squad.

And Alex McLeish's visitors offered little in the way of an attacking threat as Mexico controlled proceedings from the outset.

After a lively start, Mexico hit the front in the 13th minute when Dos Santos and Vela teamed up for the opener.

Vela received the ball and composed himself just inside the penalty area before laying the ball to the unmarked Dos Santos, who placed the ball low past Scotland goalkeeper Jonathan McLaughlin.

Bagpipes were playing throughout the game but they could not inspire Scotland, who were unfortunate not to concede a second after Layun hit the post approaching the half-hour mark.

McLaughlin was kept busy in the first half but he managed to hold Mexico at bay heading into the interval.

It was almost one-way traffic in the second half – as Mexico veteran Rafael Marquez made his 144th appearance – though Scotland's McBurnie nodded a header against the post within four minutes of the restart.

Mexico wasted a golden opportunity to double the lead three minutes later when Lozano picked out Jimenez inside an empty penalty area but Scotland somehow escaped without conceding.

Lozano was in the thick of the action in the 66th minute – the PSV forward dribbling into the area before his thunderous effort rattled the crossbar.

Mexico managed to put the ball over the line in the 72nd minute but Oribe Peralta's goal was immediately ruled out for offside, while Jesus Corona had his shot cleared off the line in the closing stages.