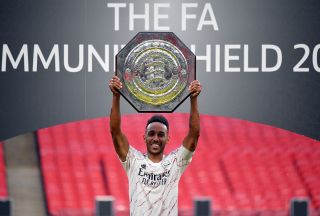 Mikel Arteta was delighted to get “another trophy under the belt” and remains confident that star turn Pierre-Emerick Aubameyang will sign a new deal after wrapping up Arsenal’s Community Shield victory against Liverpool.

Aubameyang ended a fine team move with a superb curling strike to open the scoring at an empty Wembley, before Liverpool substitute Takumi Minamino levelled in the second half.

The match finished 1-1 and the north Londoners capitalised on Rhian Brewster’s missed penalty, with Aubameyang sealing a 5-4 spot-kick win.

“Well, it’s always great to come to Wembley and get another trophy under the belt,” Arteta said.

“We had a big challenge today against this incredible opponent and as well because we had only three sessions together. Some of the players had only one session with us.

“But they still showed the courage and ambition, and the way they want to compete for this football club.”

Aubameyang played a key role in the Community Shield win, as he did against Chelsea in the FA Cup on August 1.

Just like that Wembley triumph, the post-match was dominated by questions about the skipper’s future as well as his performance.

Aubameyang was coy about negotiations – “We are going to see…today we will just take the trophy and that is it,” he told BT Sport – but Arteta is confident an agreement is close.

“I keep saying the same thing,” the Arsenal boss said. “I try do my job, which is convince him that he is in the right place, that he has the environment here to produce the moments like he’s done today and he’s done here three weeks ago.

“I am very positive that he’s going to sign but a lot of time there’s a lot of things involved in a contract deal and we are trying to show him.

“I think the move from the team (for his goal) was really, really good and he put the ball, all the time, where it belongs, which is the back of the net.

“As well the way he took the last penalty. He wanted to take the last one and he took it really well – and another trophy for Arsenal.

“I’m delighted with his performance with and without the ball as well.”

We came close, but unfortunately it wasn’t enough today. We’ll learn what we can and show up strong at the start of the start of the #PremierLeague 🔴🔴 #CommunityShieldpic.twitter.com/IwPGWtg0ht— Gini Wijnaldum (@GWijnaldum) August 29, 2020

He said: “When you play against a formation like this then you need to be really fresh in the final third and you need to force it, create angles. The rhythm for that fell a little bit. Today it was not enough.

“We created enough, had the ball quite a lot, but had to be careful of their counter-attack, deserved the equaliser, could have scored more, but when you don’t (score) you have to take it.

“A penalty shoot-out is always a little bit of a lottery and we were unlucky there, so congratulations to Arsenal, that is how it is. We respect the competition.”