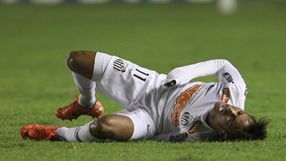 Neymar was about to take a corner in the 78th minute when he was hit by an object thrown from the crowd at the packed Hernando Siles stadium in the Bolivian capital and fell to the ground.

The 20-year-old was soon back up on his feet, but the Fox Sports television commentator said Chilean referee Enrique Osses warned Bolivar he would suspend the match if there was a repeat of the incident.

South American champion Santos once again struggled in the thin air of La Paz, 3,600 metres above sea level, having lost to The Strongest at the start of their defence of the title in February.

However, they recovered to win their group and qualify with home advantage in the second leg of the first knockout round at the Vila Belmiro in two weeks' time.

"They don't like playing here," said Bolivian international Jhasmany Campos, voted man of the match after his part in both of Bolivar's goals.

"We set out to score at least three goals to be calm for the return in Brazil, we ran and probed but we couldn't score more," he told Fox Sports.

Bolivar stunned Santos by taking the lead after 90 seconds when midfielder Campos's free-kick came back off the far post, hit goalkeeper Rafael and went in.

The woodwork also played a part in the Brazilian side's 35th-minute equaliser when goalkeeper Marcos Arguello dived to save former Brazil midfielder Elano's free-kick but the ball came back off the post and right-back Maranhao followed up to ram it home.

The winner in the 75th minute also came from a free-kick, Campos curling his low shot inside the base of the near post past Rafael's dive.

Arguello prevented Neymar from snatching a late equaliser with a diving save to tip his shot over the bar.

In an all-Brazilian match in Porto Alegre, home side Internacional were held 0-0 by Fluminense from Rio de Janeiro in the first leg of their tie.

Inter's Argentine forward Jesus Datolo, who has been in fine scoring form in the Gaucho (Rio Grande do Sul state) championship in southern Brazil had a 57th minute penalty saved by Flu's Diego Cavalieri.