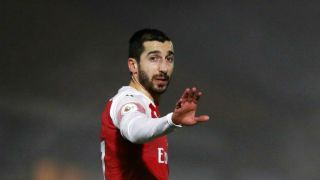 The Armenia international has been sidelined with a foot injury since mid-December but he is back in full training and in contention for this weekend's trip to West Yorkshire.

Mkhitaryan made his Gunners comeback in the Under-23 clash with West Ham on Monday, although the game was suspended due to heavy fog with Arsenal leading 3-0.

There is more good news for Unai Emery in defence, too, with Shkodran Mustafi showing no ill effects of the hamstring injury that forced him off against Manchester City last weekend.

Granit Xhaka could also return against the Terriers after missing Arsenal's 3-1 defeat at the Etihad Stadium with a tight groin.

Meanwhile, Greek defender Sokratis Papastathopoulos is nearing a comeback from the ankle injury he sustained in Arsenal's 3-1 loss to Manchester United in the FA Cup.

The Gunners expect Sokratis to be back in full training by the end of the month.