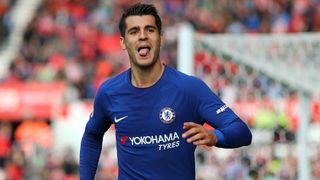 Alvaro Morata has moved to clarify his reported dissatisfaction with life in London, suggesting he would happily stay with Chelsea for another 10 years.

In an interview with Italian newspaper La Gazzetta dello Sport, former Juventus striker Morata revealed his difficulties in adapting to the "stress" of England's capital.

The comments sparked speculation that he could seek a premature exit from the five-year contract he signed with the Premier League champions in July.

But, speaking ahead of the Blues' crunch Champions League trip to Roma, the 25-year-old insisted a "communication problem" misrepresented his views.

"I'm happy with this club, in this city, with everything in London. I really like London and, probably, if I make good and improve, I can stay here more than five years," Morata said.

"If Chelsea proposed me 10 years I'd probably sign that too.

"But I need to score many goals otherwise Chelsea will buy another player. It's normal.

"I want to say, probably in the future when I finish in my career, I won't live in London. For me, I prefer the place I was born. But now I'm very happy.

"When I say it's a stressful city, I'm only talking about the traffic and that there are a lot of people. But it's an incredible city with many religions and many kinds of different people, so I really enjoy London."

Morata says he is 100% fit now and he hopes to score tomorrow. He was happy with the victory over Bournemouth even if he didn't score.October 30, 2017

While he has never scored against Roma, Morata will be key to Chelsea's chances of claiming a potentially decisive three points at Stadio Olimpico on Tuesday.

And the two-time Champions League winner believes his developing relationship with Eden Hazard can help lead Antonio Conte's men to the knockout stages.

"We have a good understanding. He's one of the best players in the world, and it's easy playing with Eden," Morata said.

"I think we can improve a lot."