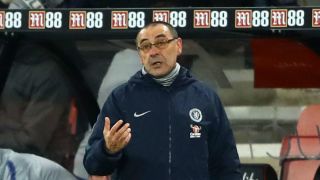 Maurizio Sarri has no qualms over the mounting pressure upon his Chelsea reign, insisting matters were no simpler during an acclaimed spell at Napoli.

The Blues went down to their joint-heaviest defeat of the Premier League era on Wednesday, slumping to a 4-0 loss at Bournemouth.

A section of travelling supporters at the Vitality Stadium sung, "You don't know what you're doing" when new recruit Gonzalo Higuain was substituted midway through the second-half collapse, while another fan confronted Sarri upon his exit from the stadium after a lengthy dressing-room debrief.

Speaking ahead of Huddersfield Town's trip to Stamford Bridge on Saturday, the 60-year-old offered a calm and staunch defence of his methods, labelling himself a "dreamer" who would stick to the style of football he honed to widespread admiration while in Naples.

That three-year stint did not yield a major trophy, however, and it has been observed the demands for honours at Chelsea place a different strain upon Sarri.

Perhaps predictably, he does not see it that way.

"I arrived from Naples. Napoli is, for the third time in a row, in the Champions League," he said. "So the level here is really very high, but the old level wasn't so low.

"I think there was more pressure because Naples is the only big city in Italy with only one team. So, in Naples, the pressure from the fans is really a big pressure."

Sarri estimated he managed a combined six or seven hours of sleep in the two days following the Bournemouth debacle as he poured over the evidence.

Despite accusations that opponents have started to find his tactics predictable – Eddie Howe's side become the latest team to effectively shackle deep-lying playmaker Jorginho – Sarri, who arrived on three-year contract before the start of this season, maintained he will stick to what he knows.

"It's not my problem," he replied when addressing whether his employers would tolerate a prolonged transitional period. "I want to remain the same man.

"I think that my job is always at risk and I love my job for this reason. I thrive on pressure.

"So I love my job for everything, but I know very well the rules. My job is always at risk. You can win against [Manchester] City, but after three days you are at risk."