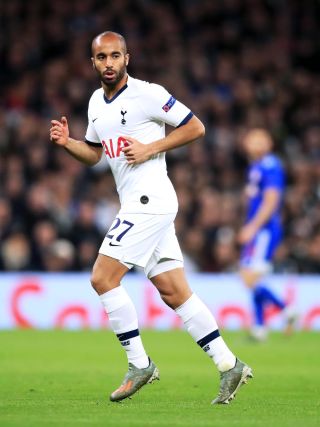 Lucas Moura is thrilled he has the confidence of Jose Mourinho after suggesting Mauricio Pochettino played him out of position.

Moura is one of the main beneficiaries of the Mourinho era so far as he has started both games, with the Portuguese also revealing he tried to sign Moura when he was in charge of Real Madrid.

The Brazilian produced an assist in the 4-2 win over Olympiacos that sent Spurs through to the Champions League knockout stages and there is a real sense that Mourinho could bring the best out him.

He never really hit the heights under Pochettino, apart from that magical night in Amsterdam where his hat-trick sent Spurs to the Champions League final, but Moura felt he was not utilised effectively.

“I am happy he likes me and he said it, it is very important to me to have this confidence from the coach and I hope to help him, help the team,” he said.

“I will always give my best and I am happy for the opportunity he has given me. I think everyone knows him. I don’t need to speak about him because he is a winner, a champion.

“He has a lot of trophies and I am sure he has much to bring for us and to add to our team, our club.

We are back on track!! 🙌🏽😃 #COYS#PL#PremierLeaguepic.twitter.com/MgfHNQLccy— Lucas Moura (@LucasMoura7) November 23, 2019

“Every player wants to play, it doesn’t matter the position. But everyone knows I am not a No.9, it is not my best position.

“When Pochettino put me there I always gave my best because for me the most important thing is the team but each coach has one opinion, a different mind.

Moura could have linked up with Mourinho several years ago when the 56-year-old wanted to take the Brazilian to the Bernabeu from Sao Paolo.

He is happy their paths have now crossed and is optimistic for the future.

“Yeah it is true when I was at Sao Paulo I had a conversation with him, not me but my agent and parents,” Moura revealed.

“In the last moment PSG went in and I decided to go to Paris.

“I have never worked with him. I am knowing him now but in the beginning it is very, very good, everyone is happy, everyone is optimistic and step-by-step we are knowing him and putting his philosophy.

“I am happy to win two games, let’s keep working and look forward.

“Everyone is optimistic with him and we believe in his job.

“I think it is too early to speak about change but I think you can see a few changes he has made about positions, some players.

“Step-by-step we put his philosophy, his way to play and I think he has a lot of things to bring to our team.”