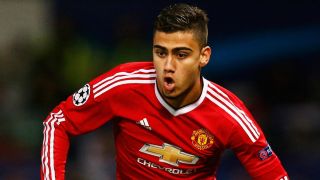 Jose Mourinho has described midfielder Andreas Pereira as a "future great" of Manchester United after the Brazilian inked a one-year contract extension.

Pereira has signed a new deal through to the end of the 2018-19 season despite being sent out on loan to Valencia on Friday.

The 21-year-old will spend his second straight season in LaLiga after impressing at relegated Granada last term.

"Andreas is already a very good footballer. He is a young player with great natural ability and a good attitude towards continuing his development," Mourinho said.

"I have no doubt that he has the potential to be one of the future great players of this club."

Following his loan move to Valencia, has signed a contract extension with : September 2, 2017

Pereira made his Premier League debut against Tottenham in March 2015 and has gone on to make 13 senior appearances, scoring once.

"The manager is building a great team here and I want to be part of that as soon as possible," Pereira said.

"I am going to continue my development at Valencia this season in the hope that I will get plenty of minutes on the pitch."