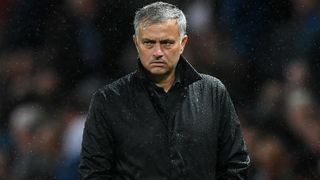 Jose Mourinho insists he is neither on the verge of signing a new five-year Manchester United contract nor ready to join Paris Saint-Germain.

The 54-year-old signed a three-year deal with the option of a fourth when he took over at Old Trafford in May last year.

There has been speculation that United are ready to offer Mourinho a bumper new deal but he cast doubt on his long-term future when he told Telefoot they will not be his last club.

However, the former Chelsea and Real Madrid boss is adamant that rumours he will sign a lengthy new contract or take over at PSG are baseless.

"I think you English media have the answer for that," he told a news conference ahead of United's Champions League clash with Benfica.

"In one day, it says I am going to sign a five-year contract, £1billion per season. The next day you say I am leaving and I'm going to Paris Saint-Germain. The answer is exactly that.

Mourinho believes it is "impossible" for any manager to stay at the same club for more than a few years given the pressure in the modern game.

"The only thing I said, and it's a true interpretation of my words, that I am not going to end my career at United. How is it possible in modern football that any manager is going to last 15 or 20 years in the same club? I think [Arsene] Wenger is the last one.

"If, in this moment, I want to finish in two, three, four or five years, I would say yes, my ambition would be to end my career at Manchester United.

"I think I'm going to be here in football for 15 years, minimum, and I think it is impossible to stay 17 years at the same club, even if you want, even if you try.

"Some people try to be clever, try to be malicious, and they say many different things. But the reality is simple: I didn't sign a new contract but I'm not thinking about leaving."