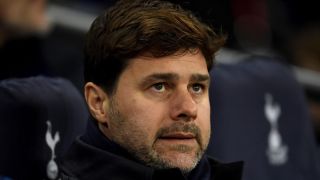 Pochettino has emerged as a possible candidate to replace under-fire Madrid boss Zidane as the Spanish and European champions struggle domestically, and the Spurs manager previously refused to rule out a move to the Santiago Bernabeu.

The 45-year-old has impressed since arriving in 2015, guiding Tottenham to second in the Premier League last season, having finished third in 2015-16.

Speaking on the eve of United's trip to Tottenham at Wembley Wednesday, Mourinho told reporters: "I look at Spurs' history and I don't see a small club at all. I see a big club with big expectations and dreams to achieve.

"I see him at Spurs for many years. I also see him leaving and having a very good career at other clubs."

United are second in the Premier League, 12 points behind neighbours and runaway leaders Manchester City, while they are eight points clear of fifth-placed Tottenham.