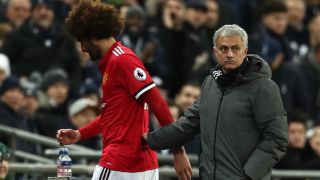 Manchester United manager Jose Mourinho told Marouane Fellaini to "sign the contract and shut up" as the midfielder nears the end of his deal.

Fellaini, 30, is set to miss several weeks after suffering a knee injury in United's 2-0 loss to Tottenham in the Premier League Wednesday.

The Belgium international is out of contract at the end of the season and Mourinho said he had told the midfielder to sign a new deal.

"I told him yesterday, 'sign the contract and shut up'," Mourinho told a news conference Friday.

"I told him, 'don't gamble too much, sign the contract before you know the extent of the injury'."

Jose confirms that Marouane Fellaini will miss Saturday's match against Huddersfield due to a knee injury. February 2, 2018

Mourinho is unsure exactly how long he will be without Fellaini, who has made 12 Premier League appearances this season.

The Portuguese tactician revealed Fellaini could miss anywhere between two and five weeks.

"It is not an ACL, a complete rupture of any structure of the knee," Mourinho said.

"But we need him, the Champions League is arriving [United's first leg against Sevilla is February 21] and lots of tough matches to play and probably we are going to lose him for a few weeks. Two, three, four or five, I cannot say at the moment."