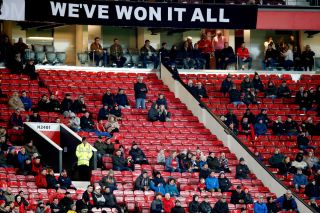 The Manchester United Supporters’ Trust claim they “totally understand” the sentiments of fans who opt to stage a walkout protest over the running of the Old Trafford club.

It is understood supporters are planning to show their discontent towards the Glazer ownership and executive vice-chairman Ed Woodward by leaving the ground in the 58th minute of United’s next home game on February 1 against Wolves.

The timing is symbolic as it represents the Munich air disaster of 1958.

There has been a toxic atmosphere that has pervaded Old Trafford of late, with chanting against the Glazers and Woodward, notably during Wednesday’s 2-0 defeat at home to Burnley.

Speaking to the PA news agency, MUST vice-chair Ian Stirling believes the message is getting through.

“I think they get it, they understand,” said Stirling. “It must hit home with them when you get that kind of chanting inside the stadium.

“There was an understanding in the summer that their image with supporters was negative. That makes it more puzzling as to why you wouldn’t take steps to improve it by supporting the manager fully in the transfer market.

“We’ve a week left (until the end of the transfer window). This is a crucial week. They must know that.

“So I think they understand where supporters are coming from. The supporters themselves have very few options, and one of those is to voice their discontent inside the ground.

“If it’s a matter of having an impact protest in terms of people walking out we can totally understand those sentiments.”

Stirling claims there has been “unrest simmering in the background since 2005” after the Glazers took full ownership of United, but on this occasion the situation “is a little bit different”.

“It is more about dissatisfaction with how it appears the club is being run to supporters,” added Stirling.

“We have a manager (Ole Gunnar Solskjaer) in place who, it is fair to say, is widely supported by match-going fans, a club legend, and the view is that he is not getting the support he needs.

“The squad was depleted, at best. We knew that we needed to move on some players, but to do that with not having replacements lined up to counter-balance it has left Solskjaer exposed. It is like an act of self-sabotage.

“So what are the priorities of the board and owners? More players have left than arrived. Why do that?

“I think that’s why you are getting supporter dissatisfaction, and that’s why it’s been voiced, not only when we’ve been losing.

“We beat Norwich 4-0 and it was loud and clear inside the stadium, so we can totally understand why supporters feel that way.”