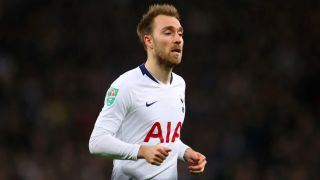 Mauricio Pochettino stressed the importance of not pressuring Christian Eriksen into signing a new deal at Tottenham, likening the situation to letting his dog run free in the park.

The Denmark international, who joined from Ajax in 2013, has 18 months left on his contract but is yet to come to an agreement over a renewal.

That delay has sparked speculation linking the midfielder with a move to LaLiga champions Barcelona, although Pochettino appears unconcerned that negotiations are yet to reach a conclusion.

"Maybe he will sign next week or in six months, or the club and him are having different challenges and dreams," Pochettino told a media conference ahead of Sunday's clash against Manchester United at Wembley.

"He's a very special person. You need to give freedom, like on the pitch, you can't put him in the box.

"Like my dog, when you go in the park, you have to give freedom and trust."

Ahead of Spurs' EFL Cup semi-final first-leg win over Chelsea earlier this week, Pochettino declared the club may need to "operate in a different way" if they are to end their trophy drought, which dates back to 2008.

Those comments were taken by some as Pochettino's way of pleading for greater financial backing to bolster his squad, but the Argentine insists that was not the meaning behind his words.

"When we talk about operating in a different way, it's to create something different to try to help the club achieve everything it wants," he said. "It doesn't mean when we operate it's only asking for more money.

"It's quick that all the people say when we need to operate in a different way it's to operate with money. We need to create a way, because in the last four seasons and a half, we were adapting us to the project, to the club.

"To play now in our new stadium, of course always you need to adapt and find different ways to operate. That doesn't mean how we operate today is not right, but of course with time you need to innovate and find new ideas and always be open to try to improve.

"That is the challenge or the way that we do things."