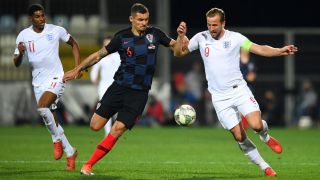 England captain Harry Kane believes he is still at his best, saying questions about his form were only being asked because of his prolific recent seasons.

Kane has now gone six games without a goal for his nation, last netting for England in a round-of-16 win over Colombia at the World Cup.

The 25-year-old has five Premier League goals for Tottenham this season as he looks for a fifth straight campaign of 20-plus strikes.

Amid questions over his performances, Kane dismissed any suggestions he had gone backwards.

"It's been tough after the World Cup, not getting much rest, but I think I've dealt with it well," he said.

"I've stayed fit and stayed healthy. That was my main priority at the start of the season. Now it's building on that and pushing forward over the winter.

"I set a standard for myself and I want to reach that standard every game I play. I don't think my game has dipped."

Kane and England were held goalless by Croatia in a 0-0 Nations League draw in Rijeka on Friday.

A good performance away from home. Deserved more but need to be more clinical.  October 12, 2018

While he believes he is still at his best, Kane said he understood why he was being questioned.

"When you set the standards that I've set over the last few years and you fall a little bit below it, people are going to talk," he said.

"That's just the game we are in. I'm experienced enough now to know that and not get too high or too low. I just stay focused on my job and what I need to do.

"In the Premier League I'm second top goalscorer and I'd like to have scored more for England recently.

"But as a striker you go through spells where maybe it goes off the bar and other times it comes off your heel and goes in the back of the net like in the World Cup against Panama."