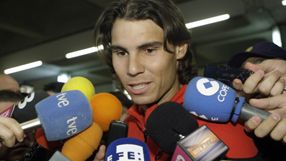 Laudrup, who took charge at the Balearic Islands side at the end of the 2009/10 season, resigned on Tuesday after clashing with the board over transfer policy and said he had decided to leave for the good of the team.

Mallorca native Nadal, whose uncle Miguel Angel will take charge of the team for the time being, told local television the board's actions had created "doubts" about the club and what had happened was "a shame."

"As a fan I would have liked things to have gone differently," added the tennis world number two, who bought into the club last year.

Another of Nadal's uncles, his coach Toni, said Laudrup had brought prestige to Mallorca.

"It's tough to leave because I was very happy with the team and my staff, but I think this is the best solution for the good of the team," Laudrup said in a statement posted on Mallorca's website earlier on Wednesday.

"I'm going to miss everyone a lot, but it's the best thing for everything to go back to normal," he added.

"We've won two from three at home and even though I'm not the manager any more, people have treated me superbly and I'm going to stay here and follow the team closely."

Regarded as one of the finest playmakers of his generation, Laudrup also had stints coaching Mallorca's La Liga rivals Getafe and Russian club Spartak Moscow.

Mallorca narrowly avoided the drop to the second division last season, finishing in 17th spot, one point above the relegation places.